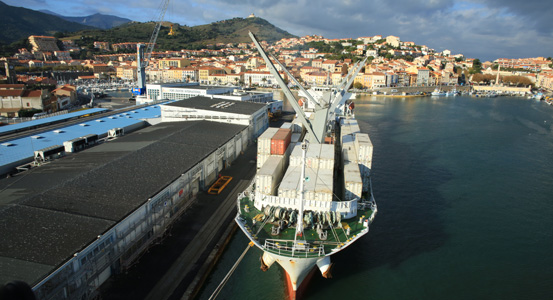 TRANSIT FRUITS Marseille, founded in 1957, is a subsidiary of COMPAGNIE FRUITIERE Group.

As a transport operator, TRANSIT FRUITS carry your commodity on the vessels operated by AEL (Africa Express Line, a subsidiary of COMPAGNIE FRUITIERE Group) with the Bill of Lading EAGLE. TRANSIT FRUITS has its own network of agents (EOLIS Belgium, EOLIS Ivory Coast, EOLIS Senegal, EOLIS Morocco and EOLIS Cameroon) as well as representatives in all ports reached in Europe and West Africa.

Africa Express Line operates a fleet of 9 specialist vessels, all of which are equipped with controlled atmosphere and temperature regulation systems.

These 9 ships are deployed on two routes:

As a Freight Forwarder, TRANSIT FRUITS is the specialist in the multimodal transportation of perishable goods under temperature control, start to finish between Africa and Europe.

In order to give its customers the benefits of AEO status, TRANSIT FRUITS adopted the AEO approach and has obtained the status of Authorised Economic Operator (AEO) and was issued the certification AEOF “Customs Simplifications”/”Safety and Security”.

TRANSIT FRUITS Port-Vendres and its partners handle the port transit of goods belonging to the Group and its customers: